Does Your House Cat Need Another Feline Friend? As a cat parent, sometimes we wonder if our pet is happy on their own or do they need someone to share their world with. Just like us humans, our pet cats have feelings and we just need to understand them by their nature.

Famously independent and often as resourceful as their jungle-prowling relatives, cats are seen as lower-maintenance, so cat parents may feel more comfortable leaving their pets on their own more often (and with fewer tinges of guilt). The truth, though, is that cats crave social interaction and companionship, despite those clichés about the aloof feline loner. Visit Cat Facts for more helpful ideas.

So, what do cat parents need to know about feline loneliness and how to cope with it?

“If cats don’t have the possibility to share spaces, proximity and time with their preferred buddies, they will get lonely,” explains Dr. Carlo Siracusa, director of Animal Behavior Services at Penn Vet’s Ryan Hospital.

Should You Adopt Two Cats Together?


Cats were once considered to be solitary creatures. Although there may be individual differences, we now know that they are in fact social animals who benefit from interaction with their own and other species. As a result of this knowledge there has been a move to promote ownership of more than one cat, and in particular to encourage owners to take on two cats at the same time. This can be beneficial as the cats play together and provide each other with both physical and mental stimulation.

However, it is important to have an understanding of feline society if you are to take on two or more cats successfully.

There are benefits to having two cats, but they apply only when the two cats are well matched and have enough physical space to live together comfortably. One benefit is that the two cats provide each other with exercise, social interaction, and other forms of mental stimulation. Cats housed together have more opportunity to “be cats” by socializing and playing with each other, and this means they are less likely to be destructive or engage in other problematic behavior. For example, some single cats annoy their owners by trying to wake them during the night for play.

Two cats might still wake the owner by tearing around the home, but at least the owner isn’t getting up out of bed to entertain the cat. Another benefit of two cats is that they are sometimes cleaner than a cat living by itself.

Cats will groom each other’s ears and coat, often getting at places the cat can’t reach on its own!

The positive impact of having multiple cats can be negated by “cohabitation anxiety” if the cats do not get along. Adult cats with a history of living alone are better off remaining solitary unless you can provide so much space that the cats essentially live alone in the same home. Check out Cat Companion for better understanding and insight when getting your next cat.

It’s also important to be aware that cats can take a LONG time to learn to like each other. Dogs usually decide to be friends, or not, within a few hours or days. Cats, on the other hand, can take as long as a year to stop squabbling and start hanging out together.

What To Expect In Reality You can’t force your pets to like each other. Take it easy, step by step. We can’t directly assume whether or not your pets will be friends, but we do have techniques that will increase your chances of success in doing so.

Most important thing to remember, try to choose a cat with a similar personality and activity level to your current pet. An older cat might not appreciate the antics of a kitten.

Go slow during the introduction process to make sure we are doing the right thing. Don't throw your pets together in a sink-or-swim situation and just hope they'll work it out. That's a recipe for the fur to fly!


Cats are territorial, and in general they don't like to share. A cat who's unhappy about a newcomer may express their displeasure by fighting with the other pet and marking territory (peeing on the floor, wall or objects).
Cats also dislike change, and a new cat in the house is a huge change. These two-character traits mean you could have a tough (but not impassable) road ahead.

How Your Cats Socialize

Some cats are more social than others. An 8-year-old cat who has never been around with other animals might never learn to share their territory with other pets.

But an 8-week-old kitten separated from their mom and litter mates for the first time might be glad to have a cat companion.

All of this means that your current pet and your new cat need to be introduced very slowly so they can get used to each other before a face-to-face meeting. Slow introductions help prevent fearful or aggressive behavior from developing. Below are some guidelines to help make the introductions go smoothly.

The introduction process can take anywhere from a few days to a few weeks, or even a few months in extreme cases. Be patient. 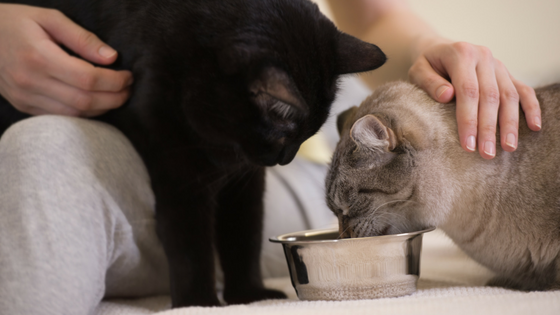 To allow time for the newcomer to adjust to you and their new situation, keep them in a small room with their litter box, food, water, scratching post, toys and a bed for several days to a week.

Feed your resident pets and the newcomer on each side of the door to this room, so that they associate something enjoyable (eating!) with each other's smells. Don't put the food so close to the door that the animals are too upset by each other's presence to eat.

Gradually move the dishes closer to the door until your pets can eat calmly while standing directly on either side of the door.

Try to get your pets to interact with a toy. Tie a toy to each end of a string, then place it so there's a toy on either side of the door. Hopefully, they’ll start batting the toys around and maybe even batting paws.

Be sure to spend plenty of time with your new kitty in their room, but don't ignore your resident cat. To animals, smells are far more important than appearances, so you want to get your pets used to each other's scent before they meet face-to-face.

Swap the blankets or beds the cats use, or gently rub a washcloth on one cat’s cheeks and put it underneath the food dish of another. If there are more than two animals in the house, do the same for each animal. When the pets finally do meet, at least their scents will be familiar.

Once your new cat is using their litter box and eating regularly while confined, let them have free time in the house while confining your other pets to the new cat's room. It's best to introduce your new cat to a room or two at a time and increase their access to other rooms over a few days. This switch provides another way for them to experience each other's scents without a face-to-face meeting. It also allows the newcomer to get familiar with their new surroundings without the other animals frightening them.

You can do this several times a day, but only when you're home to supervise. If you have to leave the house, put your new kitty back in their room.

Next, after you’ve returned the cats to their designated parts of the house, use two doorstops to prop open the dividing door just enough to allow the animals to see each other.

Repeat the whole process over a period of days—supervised, of course.

Getting To Know Each Other It's better to introduce your pets to each other gradually so that neither animal becomes afraid or aggressive. Once the cats are face to face, though, there will be some kinks for them to work out.

If you're really lucky, your cats may do some mutual sniffing and grooming, and you're on your way to success. They may sit and stare at each other. You can provide distraction by dangling toys in front of them at the same time.

This may encourage them to play together. Some of the toys that your cats will surely enjoy together you can get at online stores like activefelinesolutions.

They might sniff each other, hiss and walk away. That's to be expected. This may go on for a few days or so, and then you'll probably find them both sleeping on your bed.

Lastly, we cannot avoid fighting between your current pet and the newcomer. We as parents should know how to handle the situation if ever they get on a fight while they are on the process of knowing each other and sharing territory.

Let’s Take Note on That!

If you're not so lucky, they may be very stressed. They may only posture and make a lot of noise. But, as soon as there are signs of increasing aggression (flattened ears, growling, spitting and crouching) make a loud noise by clapping your hands or throw a pillow nearby to distract them. If the standoff continues, very carefully herd them into separate parts of the house to calm down. This could take up to 24 hours, and the cats may take out their stress on you.

If the cats fight repeatedly, you may need to start the introduction process all over again and consider getting advice from a vet or animal behaviorist.

Reduce the tension between your two pets. Have your cats examined by your vet before introductions to make sure they're all healthy. Try to keep your resident pets' routine as close to what it was before the newcomer's arrival. Make sure all cats have a "safe" place to escape to.

If you have multiple cats in your home or just added a new cat, can they share the litter box(es)?

Well, it all depends on your cats. Some cats are okay with sharing and others aren’t. Regardless of your situation, you do need to have at least one litter box for each cat.

Even if all of your cats use the same one box, it’s important to give them options!

Let your Best Feline Friends Bond with Each Other! Living with multiple cats isn’t always easy. Your cats’ wildcat ancestors were mostly solitary creatures who put a lot of time and energy into defending their territories.

Even though your domestic cats live indoors where it’s cozy and safe, they still maintain those wildcat territorial instincts.

Of course, wanting your cats to love each other and bond isn’t a lost cause; we’ve all seen heart-melting photos and videos of cats cuddling.

Whether your cats will ever get to that point will depend upon their individual personalities, but there are several things you can do to help calm their territorial instincts and nurture peace in your multi-cat household.

One of the easiest ways to prevent your cats from feeling as if their territories are being threatened is to make sure they don’t have to compete for resources like food, water, the litter box, toys, scratching posts, and bedding.

It’s important to have several of each resource and to have them dispersed throughout your home. If you have all of the litter boxes in one room, for instance, your more submissive cat can become very stressed out if a more dominant cat is laying in the doorway.

You can make sure all your kitties have all their resources to get by and not fight with each other. Just go check out these cat products at activefelinesolutions.com.au.

Now if you have already decided to have two cats together or maybe add a new one to the family after reading this article, I suggest you adopt from the shelter as it is safe, ethical and affordable!